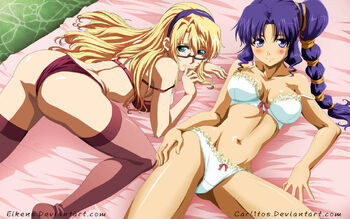 The word is not only common in Japan, it is also used worldwide inside the fandom of Japanese media to describe sexual themes or undertones. While the word ecchi could mean anything from mild to insulting in Japanese language, it is used in Western culture to divide between pornography (hentai) and playful usage of sexualized imagery (ecchi). Works considered as ecchi do not show any sexual intercourse or primary sexual characteristics. Instead, it is up to the imagination of the viewer. Inside such media, it often goes along with fan service in a humorous way. These kinds of sexual themes or undertones can usually be found in comedic Shōnen Seinen manga and harem anime. Note: fan service and ecchi are often considered the same in wording

Etymology and use in Japan Edit

The term ecchi is used to describe a category of manga and anime with sexually oriented content, that is common in works aimed at a predominantly male audience (shōnen or seinen). But also works aimed at a female audience can contain scenes which are seen as ecchi. Examples are R-18 Love Report! from Emiko Sugi and Oruchuban Ebichu from Risa Itō, which are aimed at the shōjo and josei audience, but contain rather explicit content.

This can be conversations with sexual references or misunderstandings about sexuality in dialogs (double meaning, words taken out of context), misunderstandings in visual depictions (the position or pose of a character is suggestive), clothing (underwear, cosplay, fetish clothing, etc.), nudity (ripped apart clothing, wet clothing, clothing malfunctions, etc.) and the portrayal of certain actions (touch or look at parts of the body). This kind of sexuality is commonly used for comical effect. A typical example scene would contain a male protagonist that accidentally enters a women-only bath or trips over a female character, leaving the impression of sexual harassment.

The concept of ecchi is very close related to fan service. While fan service describes every aspect to please the fans, ecchi relates to sexual themes. A special kind of fan service, that is usually bound or justified by the narrative. Robin E. Brenner Understanding Manga and Anime. Libraries Unlimited, 2007, ISBN 1-59158-332-2, p. 295

There are many possibilities to classify a work itself as ecchi, but these elements have to occur quite often (for example in all episodes of an anime). Graphically speaking, different techniques are used to show sexy pictures, usually by revealing parts of the female body. Some of these patterns are recurrent, such as scenes in a shower, onsen, or fighting scenes in which clothes are torn apart by weapons or magic. This involves the back, buttocks or even breasts and panchira. The imagination of characters is also a common excuse to show its sexual fantasies, as well as transformation scenes of magical girls. In the end, any excuse is valid to show a character partially or completely nude.

Censorship with artificial light rays is one common method to hide some elements in anime television series. The degree of censorship can vary widely across television stations, even among those broadcasting the series at the same time. The level of nudity varies strongly between works, because of the intended audience and the preferences of the authors. In some cases, though the breasts are shown on the screen, nipples and genitals are obscured by smoke, moss, hair, clothing, a decorative element, a light effect, etc. This kind of censorship was typical for Lala in To Love-Ru, Blair in Soul Eater or even Asuka Langley Soryu from Neon Genesis Evangelion. In Ladies versus Butlers! and other anime, the nipples are clearly visible through clothing, no matter how thick it is.

A typical reaction to nudity is nosebleeding, which represents sexual arousal. Rather extreme examples are Baka to Test to Shōkanjū and Maria†Holic. In both cases, the characters “nearly die” because of constant blood loss. In Baka to Test to Shōkanjū, the male characters are confronted with nice girls (including the trap Hideyoshi Kinoshita). In Maria†Holic, the main protagonist is the lesbian Kanako Miyamae. Despite her forbidden love, she joins an all-girls school, which leads often to excessive nosebleed, unable to stand up to her adversary, Maria. Despite the fact she knows that Maria is a man (also a trap), she still falls for his feminine appearance.

The visibility of the underwear (panties) is one common motif. It often leads to strange reactions between a female and the male protagonist, who would accidentally (or not) look at the underwear. The reaction can be quite varied, depending on the color and style of pantsu, but usually the male is punished for looking, regardless of the reason. The color and style of the pantsu is not chosen at random. Both are seen as an indication for the female's character. Innocent females wear simple white or kawaii themed underwear (with hearts or similar motifs), shy girls prefer the shimapan (striped panties); in some cultures red is seen as 'of the devil' or "naughty," etc.

The pantsu theme itself is so popular, that it is an important object in anime like Chobits or Sora no Otoshimono. Coincidently, both anime's fourth episodes are based on the pantsu theme as a narrative element alone. The anime Panty & Stocking with Garterbelt goes another step further, in which pantsu is used as a weapon. But even if the pantsu is not the main topic itself, it is often shown due to a "careful choice" of camera angles. In this case, it can be rightfully called fan service, since it is not needed for the story itself.

Retrieved from "https://ecchi.fandom.com/wiki/Ecchi?oldid=3998"
Community content is available under CC-BY-SA unless otherwise noted.